The Tale of Todd 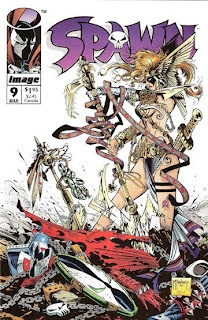 I spent an hour or so the other day reading this eyewitness account by Comics Buyers Guide Senior Editor Maggie Thompson on the most recent court case involving Neil Gaiman and Todd McFarlane. It's pretty entertaining. Both Gaiman and McFarlane take the stand; my favorite part is probably here, at the end of Gaiman's lengthy testimony, where he denies that comics have a history of scantily- clad women. I mean, I understand that you don't want to give Todd's lawyers anything, Neil, but come on.

This trial, though, is really just an extension of the seminal 2002 trial between the two. To understand that trial, you really have to go back to 1992, when McFarlane tapped Gaiman to write the issue of Spawn you see to your left. McFarlane, along with several other top-selling comics artists of the day, had just left Marvel (and the Spider-Man title they created specifically to keep him happy) to form Image Comics. There, the artists would be unfettered by the restrictions of Big Brother Publisher, free to create comics that... were distinctly similar to the comics they'd created for Big Brother Publisher. Huh. Well, at least McFarlane's Spawn was somewhat different from Spider-Man. He wore a cape, after all.

Most of the Image guys, and McFarlane in particular, soon suffered from a fan backlash when it was noticed that their comics were really really poorly written. Todd, at least, came up with a novel strategy to rebut this claim: hire the very best writers in comics to each write an issue of Spawn. Gaiman joined Alan Moore, Dave Sim, and Frank Miller in writing Spawn #s 8-11. If you're wondering, they aren't particularly good comics, though they are a step up on the average issue of Spawn at the time.

Gaiman summarized the genesis of his issue quite well in his recent testimony. Essentially given no parameters by McFarlane, Gaiman decided that, if Spawn is a warrior of hell, he must have an opposite number from heaven. So Gaiman created Angela, a female warrior angel babe, and member of a host of female warrior angel babes. Furthermore, to establish her as a killer of Spawns, he created a past Spawn for her to, well, kill; he became known colloquially as Medieval Spawn. Gaiman later returned to Angela for a three issue mini-series, which introduced more female warrior angel babes.

All of this is fine and good, until Gaiman and McFarlane have a falling out. For which there are several reasons, but for our purposes now you only need to know that Gaiman became upset that McFarlane reprinted his issue of Spawn without paying Gaiman royalties, and turned both Angela and Medieval Spawn into action figures, also without compensation. Gaiman claimed he was co-creator of the characters, McFarlane claimed it was work-for-hire, they went to trial, and Gaiman won. At least, that's the 10-cent version.

I've always found it ironic that McFarlane, whom had made grandiose claims of being "emancipated" when he left Marvel, had been so willing to screw over another creator. In fact, the issue of Spawn immediately following Gaiman's, written by Cerebus creator and noted self-publishing iconoclast Sim, is a ham-handed allegory about the evils of Big Brother Publishers, and the freedom that Sim, McFarlane, and their creations were now afforded. It seems, though, in McFarlane's mind at least, that freedom didn't extend to those he hired.

The 2010 trial stems from the findings of the 2002 trial, with Gaiman now suing McFarlane over characters he considers derivative of those from Spawn #9. Two of them seem pretty straightforward, to my eyes: they are female warrior angel babes of the same host as Angela, which everyone agrees was Neil Gaiman's idea, and not Todd McFarlane's. The defense's retort? Oh, they're entirely different... because they've got different haircuts, and their skimpy armor is different from Angela's skimpy armor, and look, this one uses a gun! Um, yeah. Point (or two points, as it's two characters) for Gaiman.


The other claim is far more interesting, involving the character (and title) known as Dark Ages Spawn. This is a series from 2001 set in the Crusades, and featuring a knight tricked into becoming an agent of hell, who still fights to retain his nobility. Sound familiar? It did to Gaiman, who claims that Dark Ages Spawn is just Medieval Spawn by another name. To refute this claim, Dark Ages Spawn writer/creator Brian Holguin took the stand. He stated, basically, that he'd been only midly aware of the earlier character, did not have him in mind at all when creating his character, and that Todd had just told him to "come up with something cool" and he'd hit upon the Crusades theme on his own. Which all seems plausible enough. You have to wonder, though, if McFarlane wasn't just trying to stick it to Gaiman by tweaking one of the characters they'd been feuding (and would later go to court) over. On the other hand, considering that McFarlane at this time still believed that he owned the character outright, it wouldn't make sense not to just call him Medieval Spawn and attempt to cash in on whatever cachet the earlier character possessed. It's certainly conceivable that McFarlane didn't put two and two together and realize that he already had a Spawn running around that was a knight from the Crusades; after all he is the guy that "...couldn't even keep track of how many spikes were on the costume."

That was not an argument that worked for the judge, as she found for Gaiman in all counts, just as the judge in 2002 had done. She did not buy the argument that McFarlane was unaware of the similarities between Medieval and Dark Ages Spawn; or, perhaps more appropriately, that he should have been aware of them, which in the eyes of the justice system is the same thing. I love how, in her decision, she offers several interesting and plausible variations on the Spawn character that McFarlane has not considered. Are you a frustrated wannabe comic book writer, Judge Barbara Crabb?

McFarlane's detractors (of which there are many) look at Neil as a hero that finally called out the bully and won. Meanwhile, Todd's fans (of which there are also many) think the whole thing is preposterous, because Gaiman was just playing in Todd's sandbox (ugh, I hate that term), and anyway, the whole thing was clearly work for hire, even if there wasn't a contract explicitly stating so. The truth, of course, is probably somewhere in between. Gaiman is clearly at least the co-creator of Medieval Spawn and Angela, in that they would not exist today were he not there to think them up. Would Todd (or somebody) have come up with something else? Probably, but legally that doesn't really matter. At the same time, I do think that the working situation for these hired gun writers was always intended to be work-for-hire, and Gaiman is taking advantage of McFarlane's lack of early business sense in clearly defining terms. But that's Todd's problem, not Neil's, and while this latter trial does feel like piling on (particularly since Gaiman doesn't even care about the profits he's to receive, and will donate them to charity), it's certainly legally justified.

One thing we can all agree on, I think is this: Todd McFarlane has the absolute worst track record when it comes to court rooms. He's now 0-3 in big time court cases, with these two joining the fairly ridiculous Tony Twist case. McFarlane, a big NHL fan, named a mafia don after Twist, a notorious goon. Twist, he of 10 career goals and 1121 career penalty minutes, sued on the grounds that his character had been defamed and his marketability hurt. Actually, as I research this, he's actually 0-4, because the there were actually two lawsuits lost to Twist; the first one was thrown out by the judge after the jury awarded Twist $24.5 million; the second case, in which Twist was awarded $15 million, was upheld on appeal. The two eventually settled for $5 million, with McFarlane's company being driven into bankruptcy.

Litigation, unfortunately, is a large part of Todd McFarlane's legacy, as are toys, Korn videos, and home run balls-- pretty much anything but comics. McFarlane hasn't drawn Spawn regularly in over a decade; his last few attempts at a comeback have resulted in painfully missed deadlines. It's been suggested that comics were never Todd's passion; while I can't speak to that, he's certainly marginalized himself in an industry he once ruled. And that's a shame, because McFarlane definitely brought something to the table back in his day. He legitimately reinvigorated Spider-Man; his work, vibrant and energetic, was exactly how a teenage boy would draw a comic book. I always felt that McFarlane lost his edge when his work became too slick and polished. Still, at least it was work. What does he have now? Not Angela, Medieval Spawn, or any related characters, that's for sure.
Posted by Ken Raining at 10:09 AM

Email ThisBlogThis!Share to TwitterShare to FacebookShare to Pinterest
Labels: Comics