Same as last post, here's another set of customs featuring one entry for the "Best Custom Minimates of 2010" contest, along with a friend.  Today brings us two of the best from the world of the WWE.  Remember how I said I wasn't as keen about Star Wars Minimates as some others?  Well, I feel the opposite about WWE.  I think WWE could easily be the most profitable Minimate license of all, since it features a neverending roster of characters old and new, easy variants, and would require minimal new parts.  Anyway, here's the only two WWE customs I'm likely to make.... 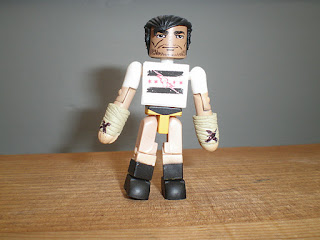 I made Punk while basking in the glory of Punk's WWE title win at Money in the Bank.  There, not only did Punk pin John Cena to win the WWE title, making good on his promise to take the championship and leave, he also debuted his awesome new shirt.  If I was ever going to wear a wrestling t-shirt (and I'm not), it would be this one.  As you can see from this photo, Punk's sporting the limited edition version from that night in Chicago: 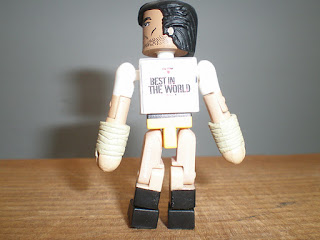 Punk's made from a Calico Jack head, Kraven the Hunter hair, Sentry's crotch, and Iron Fist's hand wraps.  Even though the Punk revolution ultimately went unfulfilled (somehow, the storyline shifted from "CM Punk vs. the world" to "Triple H, the CEO nobody likes), Punk's rise was still the best thing to happen to wrestling in ages.  And here's the decals, so that you can make your own "Best in the World" shirt (maybe you've got an extra Spider-man that needs some new duds?). I just wish I could fine a championship belt in scale to round him out.  Oh well. 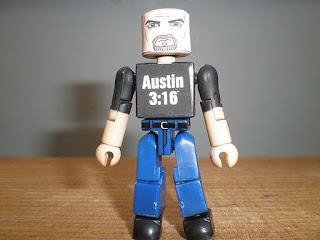 Well, you can't just have one wrestling Minimate, can you?  Austin was also made because I like that shirt.  His head is a pastiche of several of Luke's decals over at the Minimate Factory: his eyes are from the 9th Doctor Who; his goatee is from the Master (and it occurs to me that I could use that goatee to make David Brent... there's next year's "best TV" entry right there!), and his ears are from Tiger Shark.  Once again, here are these decals: 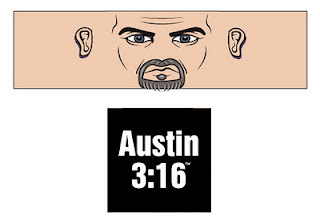 And, since you can't make pictures of wresting Minimates without an action shot: